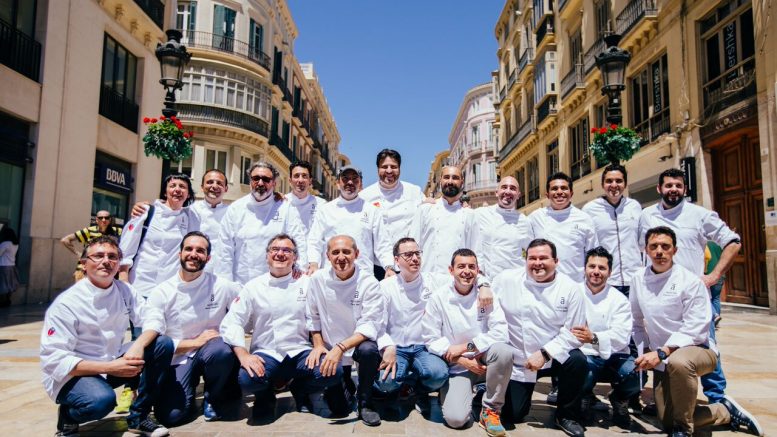 Malaga Gastronomy Festival 17th to the 27th of May

Málaga Gastronomy Festival is presented in 2018, in its fifth edition, as a consolidated event within the gastronomic events of Spain. It will be Euskadi as a guest gastronomic destination. 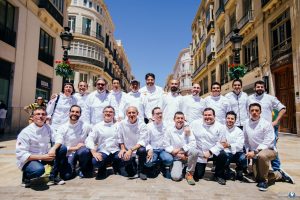 Malaga Gastronomy Festival 17th to the 27th of May

Málaga Gastronomy Festival (MGF) is an annual event organized by Lumen Proyectos Gastronómicos to promote knowledge and enjoyment of local cuisine through multiple actions; showcookings, exhibitions, tastings, cinema … This year is celebrated from the 17th to the 27th of May and whose main news is the presence this year of Euskadi as a guest gastronomic destination.

Group picture of the participating chefs at the Málaga Gastronomy Festival.

The activities will be held in different parts of the city. These activities are aimed at the general public, foodies tourists and professionals in the sector. The programmed activities are included in seven sections; live cooking (show cooking), culinary culture, conferences and debates, cooking workshops for children and adults, gastronomy on paper, restaurants in the city and tastings.

We were present at FITUR 2018 where the Minister of Tourism and Sports of the Junta de Andalucía, Francisco Javier Fernández; the mayor of Málaga, Francisco de la Torre; the manager of the Tourism and Planning Costa del Sol company, Arturo Bernal, and the director of Lumen Proyectos Gastronómicos and promoter of Málaga Gastronomy Festival (MGF), Álvaro Muñoz, were in charge of the presentation of the fifth edition of this event.

Malaga Gastronomy Festival is an event suitable for the whole family and everyone is welcome.

Euskadi is presented in this edition as the guest gastronomic destination taking over from Argentina. The invitation helps an approach to the Basque culinary roots. The program has the participation of renowned Basque chefs who will come to Malaga to participate with the Malaga cooks in master class, show cookings, tastings, tastings, cooking contests …

Part of these events will take place in the central Plaza de la Marina renamed these days like “La Marina Street Food”. Euskadi has an internationally recognized gastronomy and top level chefs such as Arzak, Berasategui or Subijana. It also has outstanding culinary schools, 31 michelin stars distributed in 22 restaurants, premium raw materials and the tradition of pintxos that acquire their own characteristics.

The Málaga Gastronomy Festival has been held since 2014 and has had great chefs such as Dani García, Charo Carmona, Richard Alcayde and Diego del Río. The chefs participate in activities such as show cooking or teach cooking classes for adults and children. Another activity they do is “Cooking among friends” in which several chefs from Malaga and the rest of Spain perform innovative and creative cooking classes

The Plaza de la Marina as we have said becomes “La Marina Street Food” a meeting place for locals, tourists, chefs and professionals of the sector to enjoy the gastronomy. It will become like other editions in a culinary and festive space during the whole day and even the night.

In addition, in Calle Larios there will be a photographic exhibition about the excellence and the value of the national gastronomic product. There will also be music and dance shows to brighten the times between activities. The multitudinous presence of people interested in enjoying a few days of the best gastronomy in a fun and cheerful environment is expected.